The force is with this Star Wars game, despite the fall of the Jedi Order! 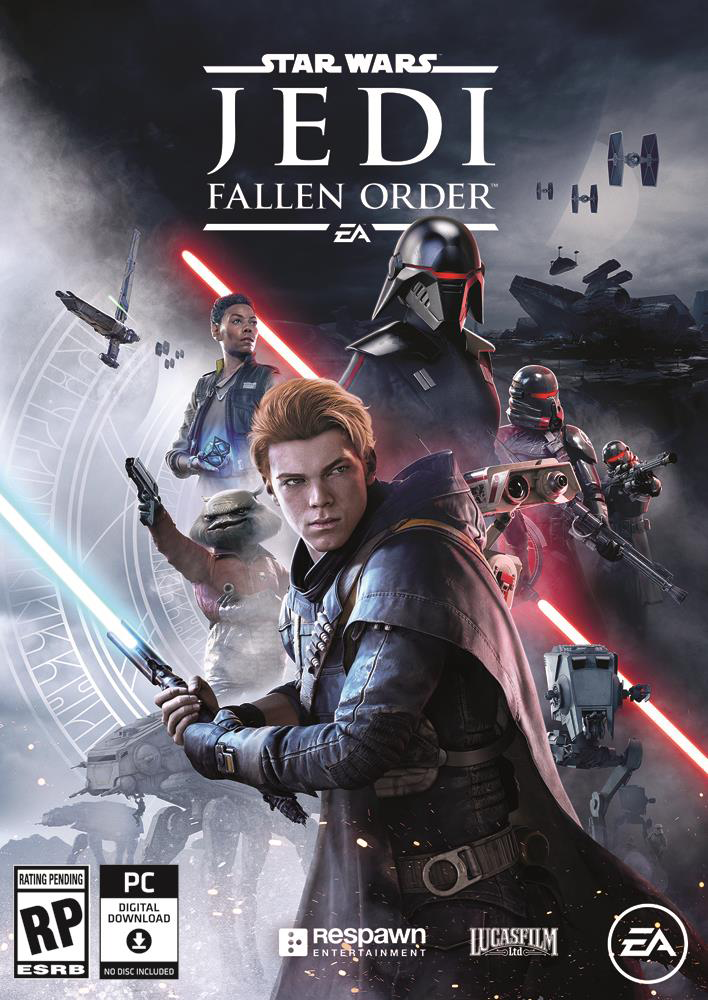 After numerous cancelled titles, Star Wars fans hoping for a single-player game have finally had their wish fulfilled thanks to Respawn’s Jedi Fallen Order. Of course, like anything Star Wars related there’s a lot of hype around the game and for some it will deliver what they wanted.  Unfortunately, there are some issues that stop this being a truly great Star Wars game.

The game centres around a young former Jedi padawan, Cal Kestis who has been in hiding for five years since Order 66 was executed by the clones on the command of the Emperor, as seen in Episode III:Revenge of the Sith. During this time in a galaxy far, far away the Empire’s inquisitors are hunting down any last remaining Jedi and you must keep Cal out of their clutches whilst tracking down a hidden Jedi holocron that contain details of the whereabouts of force sensitive children which Cal is intending to use to rebuild the Jedi Order. The story in The Fallen Order works incredibly well for the most part even, including some much-loved characters from Star Wars lore and sees you travelling to various planets throughout the galaxy covering just about every setting you would find in the third-person action game genre. Ice, jungle, dessert worlds -check, check and check!

Of course, as a Jedi, Cal is armed with a Jedi’s weapon – a lightsaber. Here, Respawn has done an excellent job of transitioning the much fabled jedi weapon into a video game. Creating a lightsaber that sounds and looks as good as they do in the movies, crackling and fizzing exactly as you would expect it to. Deflecting blaster shots back at the stormtroopers brave or stupid enough to try and put you down has been done fantastically well.  Unlike past Star Wars games, Respawn has taken a bit of a different approach to combat. There’s no rapidly swinging your lightsaber here and there in order to carve your way through the large number of stormtroopers and other enemies that stand in your way. Combat is much more refined and at times can be a little frustrating especially when facing a significant number of troopers armed with melee weapons. Up close combat is more reminiscent of the fighting in the Dark Souls games rather than past Star Wars titles. Characters have a health and posture bar. The posture bar must be depleted before inflicting damage on enemies. It’s a pretty straightforward task when facing only a couple of rank and file enemies but as soon as you come up against significant number, or boss level enemies whose posture bar recharges throughout a duel, it can become somewhat frustrating being defeated when you’ve worked so hard to chip away at their health.

Away from combat there are number of puzzles that you are required to solve before you progress. Puzzles usually involve moving a certain object in to a specific place or plugging in switches in a required order. It’s nothing taxing and for me was a little tedious serving only to unnecessarily slow the flow of the game down.

Level design is fairly varied and Respawn has done a great job of making the games various locations seem bigger than they actually are. There are numerous pathways through each area, with many only usually reachable once you have unlocked a certain power or traversed up a higher path in order to reach an area that would otherwise be out of reach. All these different pathways often lead to one centralised location and pathfinding at times can get a little tedious as one wrong turn can send you straight back to where you started. Unfortunately, the games 3D map comes in little use here as it can be difficult to follow due to the different layers of the locations being displayed on top of each other. One aspect of the game I found a little frustrating was the copious amounts of backtracking you seems to have to do. Not only through the locations once you have completed your current objective but also regularly having to travel to certain locations on numerous occasions in order to progress the story.

Speaking of the story for the most part this has been done very well, it progresses at a good pace and pays a lot of fan service, featuring numerous familiar characters with many more notable mentions. It does seem to lose some traction towards the end of the game getting a little predictable and almost unbelievable in parts lacking the depth of past Star Wars game such as KOTOR.

At its core Star Wars Jedi: Fallen Order is a fairly standard action game, with lightsaber combat. But it features one aspect that is an essential part of any Star Wars game; that is giving the you access to force powers. This allows you to change the flow of battle and employ various tactics not available in other action games. Force powers in Jedi: Fallen Order have been done brilliantly. There are core powers that are unlocked automatically as you reach certain points in the games story, such as slow, pull, and push. However, these can be upgraded and refined to grant additional and more powerful abilities. These include being able to pull enemies towards you, slow down stronger opponents and push back groups of storm troopers- something that comes in very useful when they’re stood a little too close to the edge of a platform.

For players that like to hunt down secrets, there are a host of collectable items hidden around the various locations in Jedi: Fallen Order. These include story echoes that allow Cal to hear the voices and memories of characters that have passed through the various areas before him fleshing out the story and giving an insight into the atrocities the Empire has committed on various worlds. There are also numerous lightsaber parts for you to collect. These allow you to customise the look of your lightsaber, everything from the blade colour, hilt and even the switch can be modified to your liking. It’s really great feature that any Star Wars fan will appreciate.

Star Wars Jedi: Fallen Order is a fairly simple game at its core, feeling a little like a hack and slash title with your sword replaced by a lightsaber. But as this is a Star Wars games, the use of force powers and how they can be used in combat and to manipulate the game environment set it apart from other third-person action game. This combined with a mostly solid story and plenty of fan service means that Jedi: Fallen Order is by far the best single-player Star Wars game we’ve seen since LucasArts 2008 The Force Unleashed.