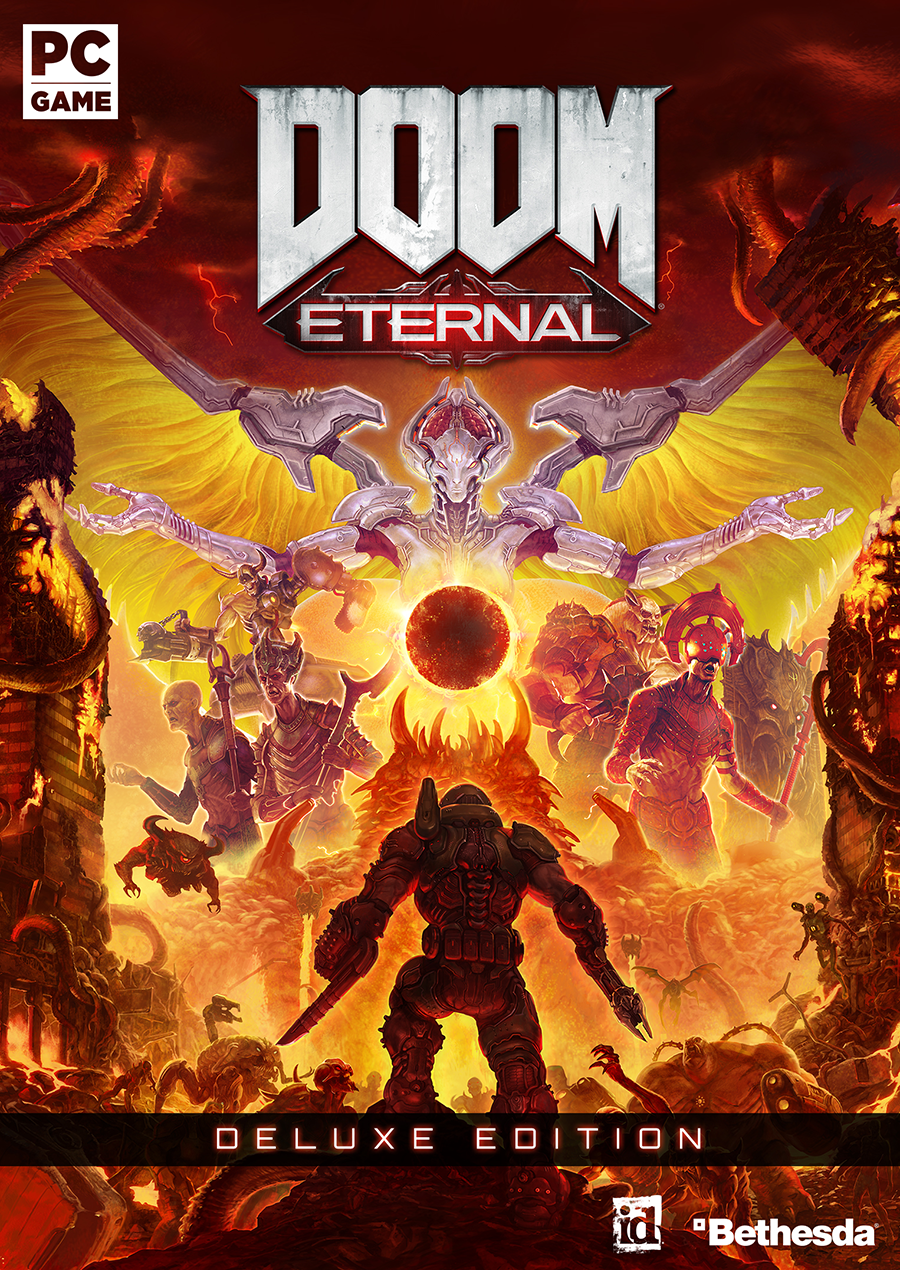 Please Note:
This review only covers Doom Eternal’s single player campaign as the online servers weren’t not available before the game’s launch date. We will review the online aspect in a separate review.
When Doom released back in 1993, I played it relentlessly. It’s the first game I remember being addicted to, pulling numerous all-night gaming sessions. It got so bad that I remember going to bed and seeing the various demonic spawn rampaging towards me whenever I closed my eyes. I’m not sure why I got so addicted to it, maybe it was because first person shooters were still relatively new back then. This obviously meant 2016’s reboot was essential gaming for me and for the most part it ticked all the boxes delivering a fast paced, classic feeling first-person shooter. Now Doom Eternal is here, and it injects a huge dose of speed, a little bit of chaos and lots of gore all whilst still managing to deliver a more refined playing experience.
In Doom Eternal everything feels much more over the top and exaggerated than in its predecessor, which results in a more pumped up version of the fast-paced intense shooter action we experienced in the last game. You play as the Doom Slayer, a hell hating killing machine intent on freeing earth from the grips of its demonic invasion. Your Praetor suit has had some modifications since the last game and comes with several new additions such a Predator-style shoulder mounted grenade launcher and flamethrower combination. Then there’s the Doomblade, a retractable serrated-blade on your left arm that allows you to perform a whole host of new glory kills. There is so much more variety in these brutal finishers than in the previous game and just when you think you’ve seen them all Doom Slayer pulls another one out the bag disposing of his demonic victim in brutal style. Blood Punch is another new ability in your arsenal, this devastating punch needs to be charged up, and once unleashed is capable of inflicting massive damage, such as completely destroying the armour on a formidable Cyber Mancubus. 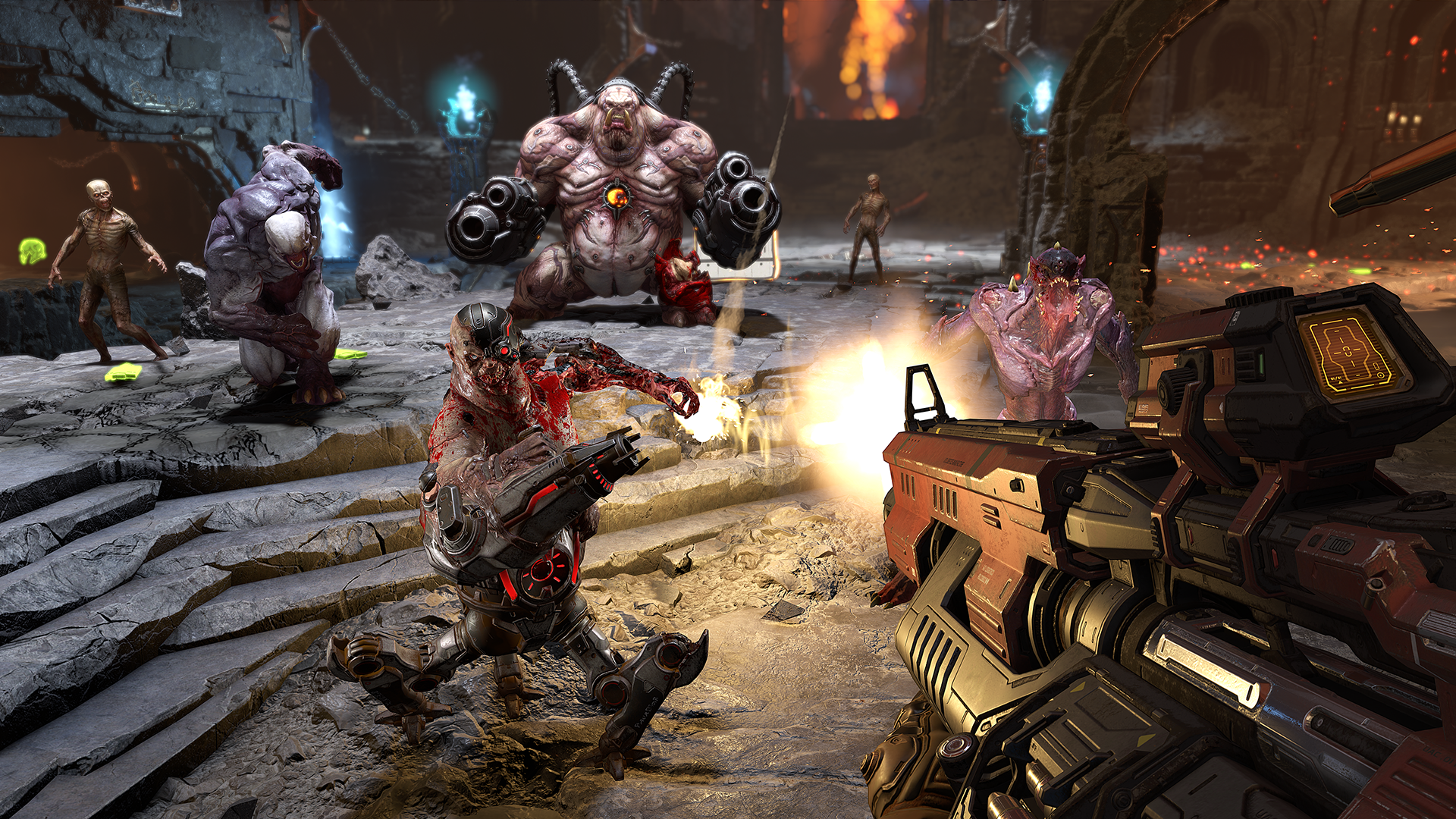 The thing you’re likely to notice first about Doom Eternal is how much faster it is over the previous game. Its pace is incredible, and quite the achievement considering Doom 2016 was insanely fast at the time of its release. Combine this with the near endless hordes of demons it’s like the whole game has been turned up past maximum. Once again, you’ll regularly find yourself locked in areas with countless enemies, unable to leave until you cleanse it of its demonic presence. The game’s default difficulty is unforgiving, even the easiest setting will provide an adequate challenge for most. Ramping up the difficulty is only for the brave, as enemies become more ferocious, dealing considerably more damage.  On the whole, enemies are much less forgiving than in the previous game. In Doom they would pursue you with mild determination, in Doom Eternal it is done with a feverish lust! The hunt seems endless and as they chase you across the map, there is no respite! At times it provides a true test of skill and you will often find yourself searching for any advantage just to survive! Thankfully, there are quite few advantages to being the Doom Slayer. Demons can’t use portals to teleport to different areas on a map and jump pads are also off limits. So these two elements regularly prove essential, allowing you to reposition and regain composure when the hordes of hell begin to overwhelm you.  You can often gain a short-lived vantage point, allowing you unleash your arsenal and inflict damage before the relentless hordes once again descend on you. It’s almost non-stop action and incredibly addictive fun, despite the potential of death always being present.
Enemies feel tougher in Doom Eternal and are able to absorb much more damage which can use up valuable ammo incredibly quickly. Thankfully id has given us a way to counteract this new found strength, with most demons having a unique weakness that allow us to quickly weaken them before, disposing of them entirely.  It works well, requiring skill without diminishing the excellent run and gun action that the first game established so well. 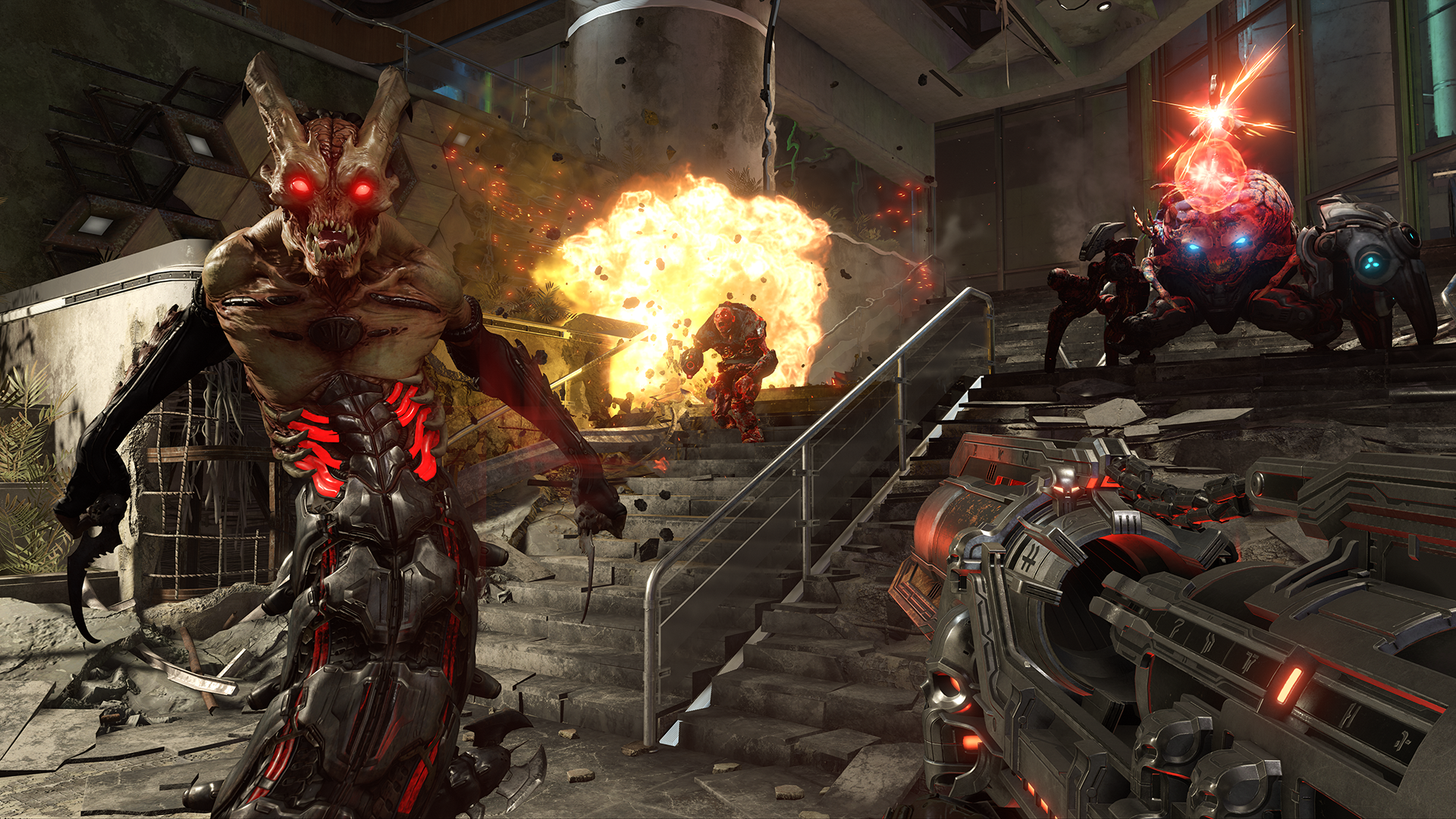 Your arsenal has been remodelled considerably, unlike in the previous game which featured weapons that were relatable to the real world. In Doom Eternal they are much more exaggerated in how they look, most likely in order to fit in with the overall exaggerated feel of the game. This is most notable on the rocket launcher and plasma rifle. Weapon changes are not only cosmetic, the Super Shotgun feels much better. It’s crisper, more precise and inflicts massive damage and now comes with a hook modification that can launch you towards an enemy before unleashing both barrels. The plasma rifle too has undergone some changes, and I much prefer how it feels. The Stun Bomb which was a little ineffective has been replaced with a Microwave Beam that attaches to an enemy causing it to explode into a pile of demonic mush! We do however seem to have lost our pistol, and the Gauss Rifle has been replaced with the Ballista, a similar but devastating energy weapon.
Jumping played quite a large part in Doom, and it’s back again in a much bigger role. Yuck! It’s not something I’m really a fan of in first-person shooter, but for the most part it’s done well. Like most things in Eternal it has been vastly reworked. You will regularly see monkey bars around the various mission areas allowing you to swing up to greater heights, or on to grabbable walls that you can scale. You now have a dash ability that allows you to propel yourself forward twice whilst airborne enabling you to reach otherwise unreachable places. Failing to make a jump, which in the previous game used to lead to your death and send you back to a loading screen has thankfully been changed. The game will now put you back to where you started. Each fall will subtract points from your armour until it is depleted. If you don’t have any armour, it will subtract points from your health instead until that is depleted. Once that happens then you are taken back to a loading screen. It’s a much better system and is very much needed, as at times the game can over use jumping puzzles some of which are a little tricky and definitely tested my patience. 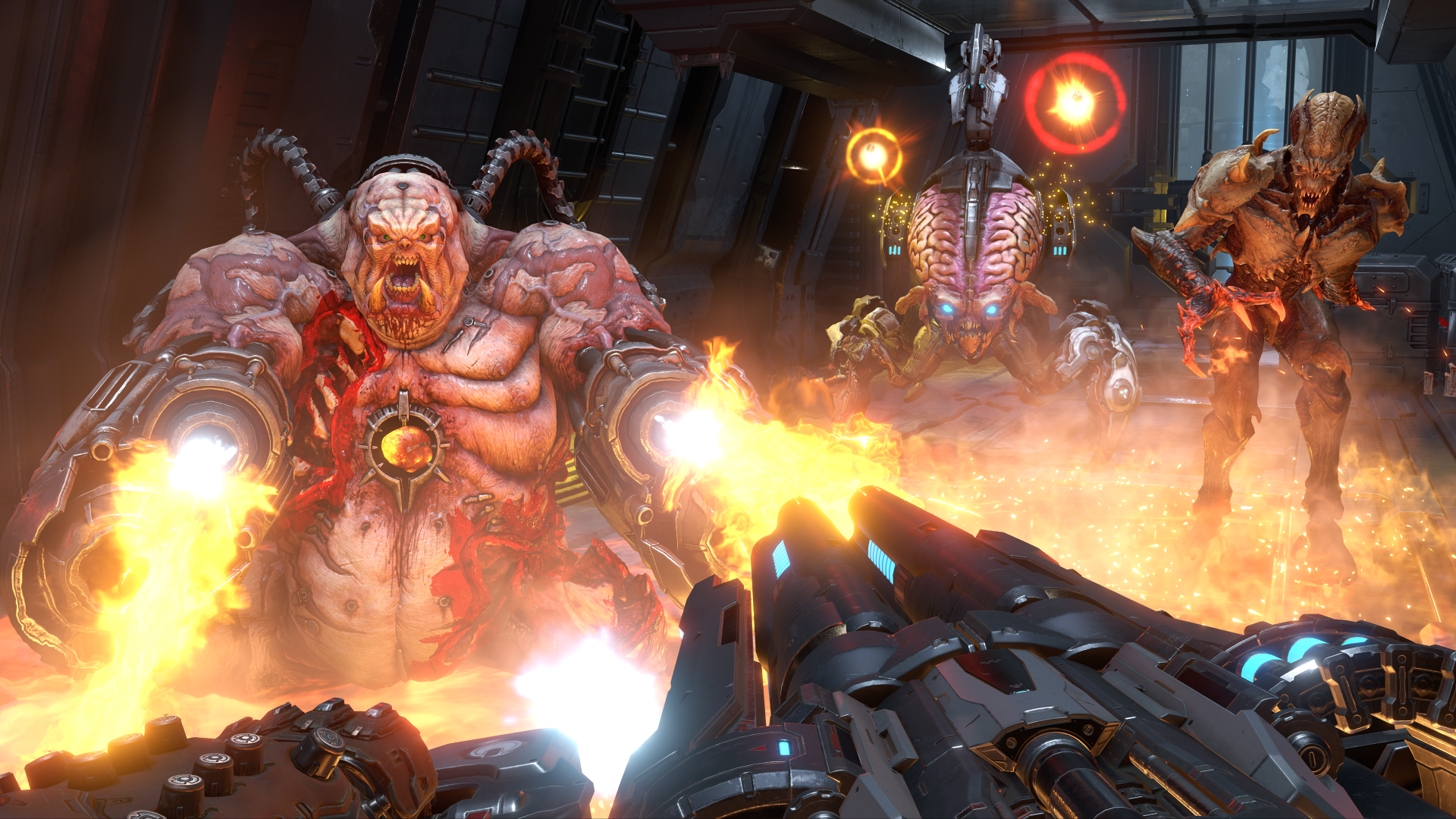 The new dash ability can also be used on the ground as an evade tactic, or simply to aid you in running away. Just as in the previous game, ammo is quite often in limited supply, especially when taking into consideration the amount of demons that you will be fighting. All this combines to make movement feel much more important than in the previous game and thankfully id has done a great job of making it faster and more fluid in Doom Eternal.
The game is filled with lots of secrets to discover, skills, upgrades and weapon mods to unlock. Before I knew it, I’d quickly racked up 20 plus hours of playing time and that was before I’d even finished the campaign. Missions are long, with multiple secrets, collectables and challenges to complete aside from the main objective. There are secret missions that have to be completed in what seems like a very short space of time, making them some of the most difficult. Slayer challenges, place you in a confined arena before unleashing the forces of hell on you. These really showcase the games new movement abilities as you struggle to survive as ever-increasing numbers of demonic spawn, look to tear you up limb from limb. 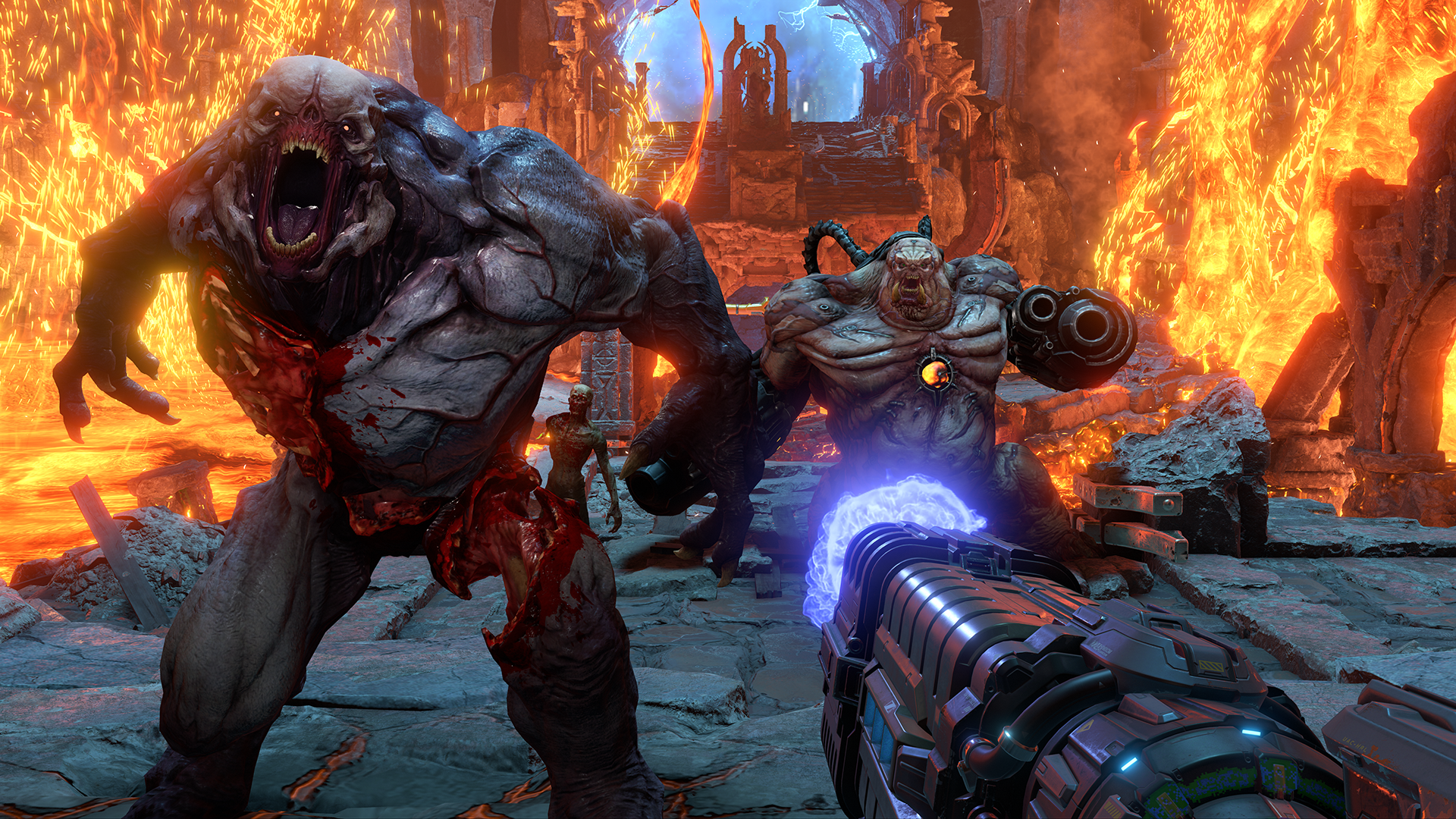 Doom Eternal gives you much more control of the development of Doom Slayer. The new upgrade system is much more intricate, granting various new perks that you can match to your playing style. Runes are now simply discovered and not earned through completing challenges and can be swapped out when required. Health and armour are now upgraded using Sentinel Crystals and add additional bonuses to play. Upgrades for your Praetor suit are much more extensive, split into five different categories that can provide environmental, combat and exploration bonuses. As long as you have enough suit upgrade points available you can purchase any upgrade you want allowing you to unlock powerful abilities much earlier on.
Building on the foundations laid by the previous game, Doom Eternal ramps up just about every aspect of gameplay. At its most frantic it really gets the heart pounding and adrenaline pumping. It’s intense, chaotic and a damn right brutal demon destroying experience. Of course, this review only covers the campaign, so I can once again see myself getting extremely addicted to Doom when Battle mode comes online. It is very much a worthy successor!